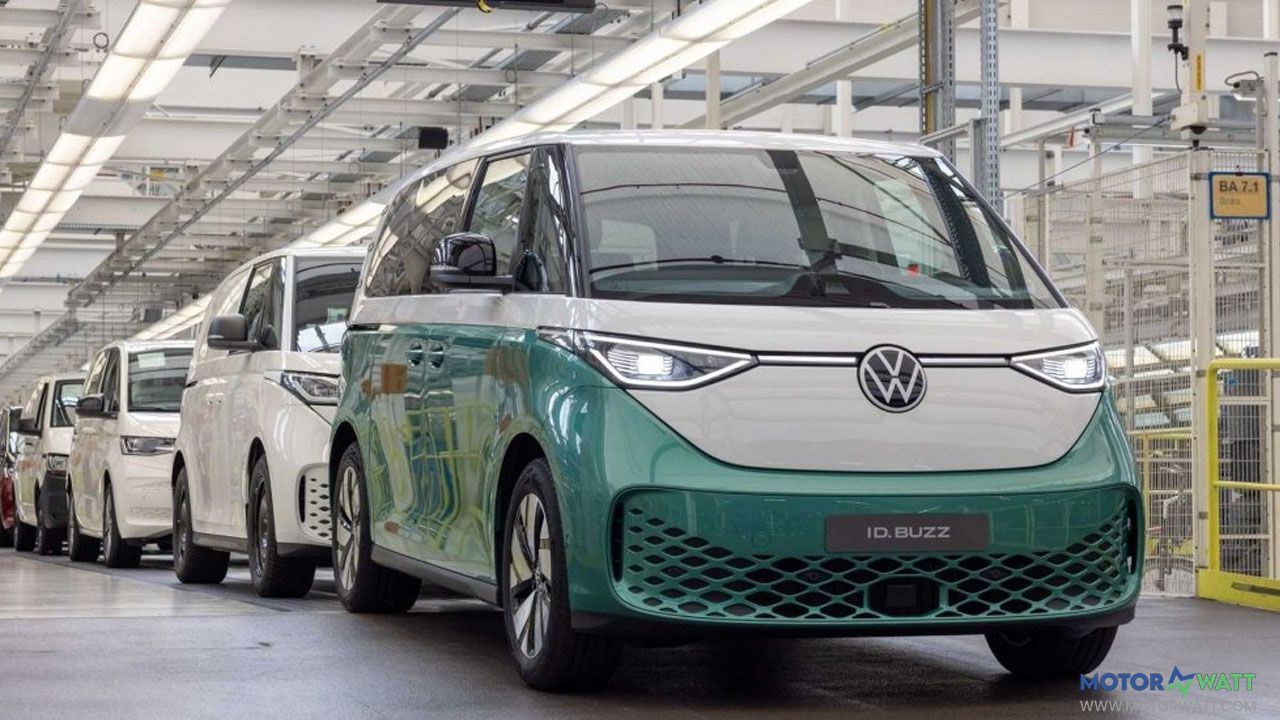 Volkswagen has resumed production of electric minivans and ID.Buzz vans at a facility in the German city of Hanover. Recall that the production of these electric vehicles was suspended at the end of June, immediately after Volkswagen discovered problems with the quality of batteries. The forced pause dragged on for about a week, but now all the shortcomings have already been eliminated and the assembly of the machines can be continued.

After a week of downtime, Volkswagen missed 200 ID.Buzz cars. The company claims that it is possible to compensate for the missing electric cars without any problems by increasing the pace of assembly, and a return to the previous output figures will occur during this week. So far, the plant has assembled about 45 ID.Buzz cars per day, but the automaker plans to increase this figure to 180 units by the end of this year.

If the letters "ID" in the name do not mean anything to you, we explain: Buzz is closely related to other modern Volkswagen electric vehicles. It is built on the same "modular electric vehicle" platform MEB (in the original language – Modularer E-Antriebs-Baukasten), where "M" is the most important part of the abbreviation.

Engineers stretched the wheelbase to 2,990 mm, and the track to 1,670 mm (respectively 224 and 89 mm more than the electric CUV from VW). The increased wheelbase adds space in the cabin, the extended track increases the volume of the cargo compartment. The turning radius of ID. Buzz at the same time is 11 m – only slightly more than that of ID.4 (9.6 m), despite the increase in length. Speaking of length: An even longer-wheelbase model is still the only Buzz variant designed for North America.

Can ID. Buzz become a worthy successor to Volkswagen vans of previous generations?
In principle, it seems to be quite powerful: the initial surge of electric traction quickly fades away, but Buzz picks up 60 km/h and keeps it willingly and confidently. In fact, thanks to the relatively narrow body (slightly less than 1830 mm from door to door) and liveliness at low speeds, it's pretty cool to ride this van. High recovery mode B is well suited for urban conditions: it is easy to adjust the speed with one accelerator, practically without touching the brakes, although Buzz does not have a full-fledged "one-pedal ride" mode.

Currently, ID. Buzz is heated up to 100 km/h in a lethargic 10.2 seconds (manufacturer's data). After all, 204 hp and 310 Nm of the only electric motor here drive a car weighing as much as 2470 kg – half a ton heavier than the rear-wheel drive ID.4. If VW offers just such a Buzz in the USA, it will become the slowest electric car in the North American market!

But ID. Buzz is doing well in Europe. It remains a cult model, the reflection of which falls on other electric cars from VW, the most spacious electric car on the market and very pleasant to drive. Buzz does a great job in the areas that really matter. And what he did not succeed in, there is still time to correct.